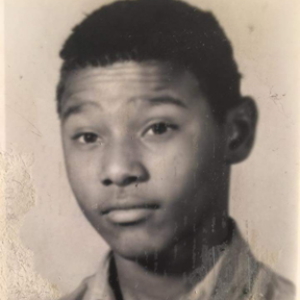 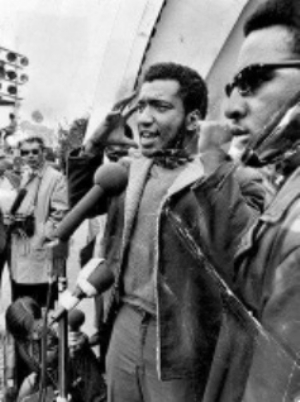 On December 4, 1969, a pre-dawn raid by the Chicago Police Dept. at the apartment of the Chairman of the Illinois Black Panther Party, Fred Hampton, left him and his Defense Captain, Mark Clark dead. Fred was 21, and Mark was 22 years old.

The Black Panther Party for self-defense was founded in 1966 by Huey Newton & Bobby Seale in Oakland, CA. The mission of the BPP was to seek justice for African Americans and other depressed communities through a combination of revolutionary theory, education, and community programs. The tenets of the BPP 10-Point Program were:

I sat down with Clarks’ younger sister by 18-months, Elner to learn more about him. To Elner, he was her big brother. They were two of seventeen children, preacher kids, raised up in the Church of God & Christ. As a young girl, Elner had Rheumatic Heart Disease. While the other siblings didn’t have a problem leaving her, when she was unable to keep up; Mark would walk at her speed, holding her hand, often stopping to tie her shoes, and make sure her scarf was secure around her neck.

Mark was a Golden Gloves boxer, that never lost a fight, except the one fight by decision, he was declared the loser. Elner remembered him saying, “even in boxing, unless a Black man knocked his opponent out, he would never win by a decision.” Mark loved Muhammad Ali, even though Ernie Terrell was the families 2nd cousin, Mark rooted for Ali, when he and Ernie had a boxing match. Mark also loved to draw and was a gifted artist.

Elner shared how important Carver Center and Ms. Juliette Whitaker was to their childhood. She and Mark performed in the play “Ali Baba and the 40 Thieves” that Ms. Whitaker directed. Elner learned to speak French and play chess under her tutelage. Brothers George, Mark, and Charles built a go-cart and Carver Center was their sponsor when they entered it in the Soap Box Derby.

I asked Elner what she thought Mark would have done if he’d had the opportunity to live a full life. She believed he would have married and had children. He was her daughter Bridgette’s favorite uncle. Bridgette recently finished a children’s book called, “A panther in the sky”.

The last time she saw her brother, Mark alive, was also the day she realized the danger he was in. Panther’s were being killed all around the country. That day Mark said, “I know they’re not going to let me live.”

It was a very cold winter morning, when the Chicago police broke into an apartment at 2337 W. Monroe in Chicago, spraying up to 99 bullets at the eight people in the apartment. After the shooting, which lasted about 5-minutes, both Fred Hampton and Mark Clark were dead. Hampton’s girlfriend, who was 8 1/2 months pregnant, was shot, along with several other people.

Elner had been out that evening when a cold chill went over her. After going home, she became anxious, so she went to one of her brother’s homes. The family was eating breakfast when they heard the news on the radio that there had been a shootout with the Black Panthers and the Chicago police. At that time the names of the deceased had not been released. The family was never officially contacted, and the city of Chicago contended that Mark’s body was unclaimed.

The family brought Mark back to Peoria for burial, choosing not to put an obituary in the paper. They did not want to draw attention to his funeral arrangements. The family was approached by TW Parks Mortuary and asked to allow them to care for Marks remains. The service was held at Freedom Hall, and Juliette Whitaker was the Mistress of Ceremonies. Rev Blaine Ramsey did the Eulogy. Rev Ramsey had been the only pastor in the city, who agreed to allow Mark to hold the Panther’s Breakfast Program for children out of Ward Chapel Church. At least 500 people walked through to view the body; the hall was too small to hold all the people. Mark’s body is buried in Springdale Cometary.

Peorians were in shock, and there was a public outcry around the country. The NAACP pushed for an investigation. Cook County State Attorney, Edward Hanrahan, made public statements claiming the police were trying to serve a warrant when Mark shot through the door. A Grand Jury Inquest lasted about three weeks, with a justified homicide verdict coming down.

Civil Rights Attorney James Montgomery and the law firm People’s Law office which had just opened in 1969, represented the living Black Panthers, who had all been charged with attempted murder.

Attorneys G. Flint Taylor and Jeff Haas of People Law office’s team spent 10-days at the crime scene collecting evidence. They removed the door that the police claimed shots had been fired through and sent it to an independent forensic lab. Their research was able to prove the police fired, all but one shot, and the holes in the door were from nails and not bullet holes. They were able to get all the charges dismissed against the Panthers.

In June of 1970, People’s Law Office filed civil rights lawsuits seeking damages on behalf of the Hampton & Clark families and the surviving Panthers. Through these lawsuits they were able to prove the Federal Government’s involvement in the raid, through a covert action program called COINTELPRO.

The goals of the COINTELPRO were:

Targeted groups were Southern Christian Leadership Conference (SCLC), Student Nonviolent Coordinating Committee (SNCC), The Revolutionary Action Movement, and the Nation of Islam. The Black Panthers were not originally on the FBI’s radar. By September 1968, FBI Director J. Edgar Hoover described the Black Panthers as being the greatest threat to internal security of the country. By July of 1969, the Panthers had become the primary focus of the program and were targeted 233 times with COINTELPRO Action.

On March 8, 1971, an FBI office in Media, PA was broken into and over 1,000 classified documents were stolen and sent anonymously to newspapers around the country. The three individuals, who committed the break-in, were members of the Citizens Commission to investigate the FBI. The night they chose to do the break-in was the night of the Ali vs. Frazier boxing match. They were never caught, and their names were not revealed until 2014.

Those stolen documents revealed the scope of the FBI’s COINTELPRO Program to spy on, infiltrate, discredit and disrupt all areas of the Black Freedom Movement.

After 13-years of litigation, the People’s Law Office won a $1.8 million civil rights settlement for the victim’s, after successfully defending the case on appeal before the Supreme Court.

Not only did the lawyers win a landmark decision, they were also able to provide evidence of FBI misconduct to a US Senate Select Committee called the Church Committee.

The goal of the Clark family is to make sure that we never forget the sacrifice both Fred Hampton and Mark Clark made in the fight for justice.

A Special Princess: Every girl has a princess inside By Sherry Anderson

<strong>A Tribute to My Big Brother by Cheryll Boswell</strong>