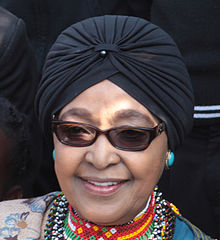 The death of freedom fighter Nomzamo Winifred (Winnie) Madikizela-Mandela, 81, stunned many and surprised others, as she made her transition earlier this month. The daughter of teachers, she was an international freedom fighter and warrior for justice. While in her 20’s she took Nelson Mandela’s hand in marriage, refusing to be involved in an arranged marriage.

President Nelson Mandela made his transition on December 5, 2013, almost five years ago. He had spent 27 years imprisoned, while Winnie Mandela fought vigilantly for President Mandela’s release and honor.

Known as the “mother” of the South African nation through her marriage to the late Nelson Mandela, she will be honored with a military home going, reserved for state officials. According to her book, Part of My Soul, Winnie wrote that she married Nelson Mandela in June 14, 1958, when she was a young social worker. This was her first marriage and his second union.

After 13 years together, Mr. Mandela divorced his first wife, Evelyn, because she had joined with the Jehovah Witness religion, in which she could not support her very political husband’s work.

At the time of Winnie Mandela’s marriage, she was wed in the Methodist church, where their union lasted legally for 38 years.

According to the book, MANDELA: The Authorized Portrait, Mr. Mandela was granted a six-day leave so he could marry his wife in her hometown of Pondoland.

They lived in Johannesburg, in the area known as Orlando West. Mrs. Mandela’s father had warned her that Mr. Mandela was already “married to the movement”, but she continued with the ceremony and an almost 40 year political life with him.

Supporting her husband, she joined the African National Congress Women’s League as a first-time pregnant mother and was later arrested for protesting for her country’s rights.

She was later fired from her hospital position, after being in prison for several weeks. She and Nelson had two daughters, who are Zenani and Zindzi, in addition to his daughters from his first marriage.

Mandela’s third wife, Grace Machel Mozambican Simbine, called Winnie Mandela her “sister.” Like Mandela’s second wife, she is an activist, humanitarian and politician in her own right.

The New York Times ran a full-page, beautiful photo of the two women, comforting and holding each other at Nelson Mandela’s homegoing. He was married to Grace Mandela for 13 years, until his death. Last week, she wrote this tribute to Sister Winnie Mandela:

“It is with a heavy heart that I address you today. As I struggle to accept your transition, I take solace in the fact that you have risen to become one of the brightest stars in the sky where you will remain ever-present and radiantly shining. You will continue to serve as a guide to your loving family, your grateful nation, our beloved Africa, and indeed, the world,” said Grace Mandela.

“The extraordinary life you led is an example of resilient fortitude and inextinguishable passion that is a source of inspiration to us all of how to courageously confront challenges with unwavering strength and determination. Thank you for your brilliant wisdom, your fierce defiance and your stylish beauty… Your legacy is everlasting. Take a well-deserved rest in peace, my BIG sister,” her tribute concluded.

Mrs. Madikizela-Mandela died Monday, April 2nd and funeral festivities will begin in Soweto on April 11 and continue until April 14th. At press time, specifics had not been established yet for the cultural and historical queen’s honor. In Harlem, NY, they call her “the Queen of Africa.”

According to her family, Mrs. Mandela died after a long illness in a South African hospital.

This tribute was written with these references: The Kenya Standard, The Economic Times, The New York Times, The Guardian, Mandela: The Authorized Portrait, Jet Magazine Commemorative Edition 2013 and Part of My Soul went with him.