They came one by one, some in groups, some with siblings and others with friends. Some were shy, while others walked directly up to the man who sat with Father Michael Pfleger, holding the microphone and gently embracing the youngest and brightest ones in the church.

As the little children gathered around Rev. Jesse Jackson, Sr., 76, in the pulpit, he recounted his days in the 1960s, with the Rev. Dr. Martin Luther King, Jr., and retold stories many had never heard.

Rev. Jackson explained how white Chicagoans attacked Dr. King with a brick, striking him in the head, but the act of violence in Gage Park did not stop Dr. King from his goals, or from gaining international support from others for peace and justice in Chicago’s streets, housing, employment and opportunities. These themes ring true today, said Jackson.

While many Illinois state institutions are closed for the Dr. King National holiday, some children have no idea why they are out of school. There are young ones who have never heard of the “Prince of Peace” and sat quietly as Jackson tried to summarize 39 years in 60 minutes.

In many historical photographs, Rev. Jackson stands with Rev. King and others, on the balcony of the Lorraine Motel (which is now a museum in Memphis, TN), and watched as King was assassinated. Jackson was the youngest member of King’s trusted inner circle and often traveled with him on marches as an organizer and civil rights advocate. He joined Rev. King as a college student activist and continued to devote his life’s work to King’s legacy and memory. 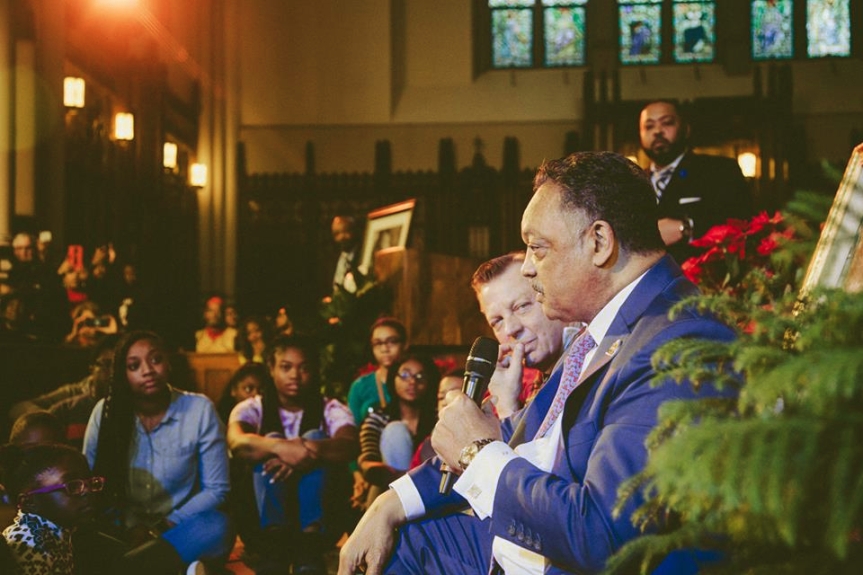 Jackson appeared on national television, a day after King’s death, and many say this act made him the “new” spokesman for the civil rights era. Some 50 years later, we are still striving to achieve what many civil rights martyrs died for in America and globally. Jackson has worked as an advocate against apartheid in South Africa and toured the Middle East. Locally, he spoke-up for the Decatur Six (Decatur,IL) for their expulsion from a local high school.

After King’s death, Jackson relocated to Chicago and established the Rainbow PUSH (People United to Save Humanity) Coalition (formerly known as Operation PUSH).

Jackson spoke slower but did not miss a beat with the young people, the church service or with guests afterwards. Just four months ago, he disclosed that his current battle with Parkinson’s disease was not going to be used as an excuse to stop advocating for civil rights on a local, national and international level. Jackson said he receives outpatient treatment at Northwestern Medical Center for Parkinson’s disease, which he estimated that he has had for the past three years.

Jackson’s father also had this disease and is now using physical therapy to counter some of the discomforts from Parkinson’s, which does not have a cure. He released a press statement about his health, which Northwestern medicine confirmed.

Jackson is not sitting around, waiting for a solution for his circumstances. After kicking off the King celebration at Saint Sabina, he featured hundreds of scholars at his annual Rainbow PUSH Excel Scholarship Breakfast at the Hyatt Hotel in Chicago and then spoke out on the current President Donald Trump’s putdowns of African and Haitian immigrants. Senator Richard Durbin, D-IL, witnessed Trump making those remarks and Jackson believes Durbin.

While Jackson was a former presidential contender for the Democratic Party, he lost both bids for office. He received the Presidential medal of Freedom from former President William Clinton.

-photos supplied by The Faith Community of St. Sabina