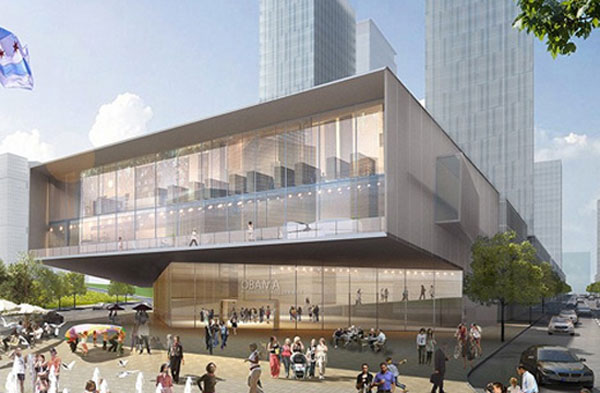 “I lived in a homeless shelter for five years and never again will I do that. I can walk with authority. I have wisdom now and I can have whatever I speak,” said a poised and confident Haywood at a spirited grassroots town hall meeting.

She spoke last month about the possibility that she can lose her home, due to the upcoming Obama presidential library, which is projected to be completed between 2021 to 2022.

Haywood was one of hundreds of people packed into Hyde Park Academy, anxious and excited to learn how President Barack Obama’s future library on Chicago’s South side, will impact their lives. All walks of lives were present in the audience, as were vested partners such as the Obama Library Foundation, the University of Chicago, the City of Chicago and the business community, debating how the library will be bad and good for the neighborhood residents.

The library can tax people out of their homes, eliminate Section 8 housing or raise the rent, whereas the average person, like Ms. Haywood, could not afford to live in the neighborhood anymore. Some audience members were fearful, while many were angry that the life they live can disappear in a matter of five short years.

Haywood said, “This library will affect all of us and all of us are taxpayers.”

Atty. Naomi Davis said TIF benefits are mandatory, but all parties need to be upfront with their intentions. “Community benefits are negotiated, not declared,” said Davis.

Davis said the library is a pipeline for education, transportation, job training programs, housing and the growth of the small business community on the South side of the city, which is composed of 95% people of color (African-Americans and Mexican Americans). Committees have already been formed and residents need to get on board now, to have input into the project.

What the community is looking for is a legally binding agreement, in which all business partners and financial investors will honor the goals that the community demands. The people want a seat at the table, with government and private business owners, so community residents can benefit from the upcoming changes in the community.

Several attorneys spoke about how business communities in other cities have been a positive influence or a negative drain on residents. As one of the attorneys explained, sometimes the business community appears with an arrogance and attitude, that can be conceived as demeaning and belittling to the people. The investors assume that their money will “take care” of community members and silence them, when to have a presidential library and shopping mall and restaurant venue, they must provide incentives for the people to work with them long-term.

Often, the business community wants to distribute turkeys and gifts during the holidays, while continuing to build over community residents. Advocates and attorneys said they do not want gifts— they want respect, employment and long-term benefits for families with low-income children and elders.

According to Hyde Park School Counselor Veronica Jackson, the school currently has less than 800 scholars in the building, which formerly held 2,500 students. There are about 125 seniors in the class of 2017, whereas in years past, the class size was tripled. A school like Hyde Park could potentially benefit from having the Obama Library literally across the street from the school.

HP scholars could have internships, on site school and library programs and employment for the young people in the upcoming years.